The City of North Miami unveiled a new sculpture installation this past Saturday, March 4th, that was commissioned by the municipality to “celebrate the legacy of Miami-Dade County’s lesbian, gay, bisexual, transgender, queer champions and the historic milestones of the LGBTQ community,” said Scott Galvin, the Councilman for the City of North Miami who spearheaded this project. The artwork, created by Miami artist Alan Gutierrez, will remain permanently installed at Enchanted Forest Elaine Gordon Park, located at 1725 NE 135th Street in North Miami. 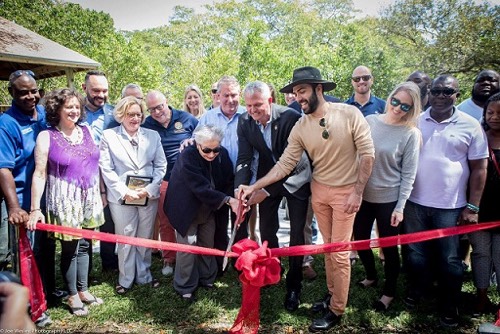 This is the first time a permanent public art installation in Miami-Dade County honors the LGBTQ community in this manner. The sculpture includes a time-line that comes full circle from 1977-2017: starting with Ruth Shack's historic championing of gay rights in 1977, to forty years later when the made-in-Miami film Moonlight is the first LGBTQ film ever to win the Oscar for Best Motion Picture, as well as being the first with an all-black cast. Moonlight was directed and written by Miamians Barry Jenkins and Tarell Alvin McCraney.

“The project was originally inspired by the June 2016 tragedy at Orlando's Pulse nightclub," said Councilman Galvin, who has served in public office for 18 years (making Galvin one of the longest-serving openly gay elected officials in the United States). “Rather than be a somber memorial to those victims, North Miami's sculpture celebrates LGBTQ lives that inspire all of us, and acknowledges the legacy of LGBTQ milestones in Miami-Dade County's history,” adds Galvin. 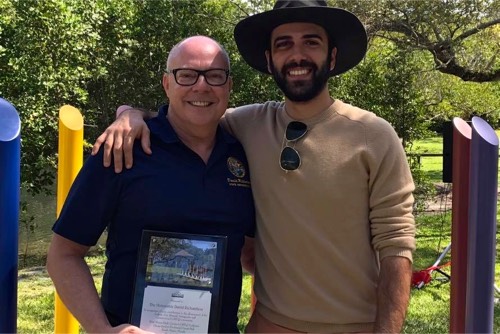 A call-to-artists was published by the City of North Miami last September, and more than thirty artists responded to the call with their submissions. The winning artwork was selected by a committee of cultural leaders and experts, and the $30,000 award for production of the artwork was announced last November.

"The unveiling event was beyond poignant and moving in ways I didn't expect," said the artist Alan Gutierrez (photo: Florida State Representative David Richardson, alongside the artist Alan Gutierrez). "I knew I was creating something that would be a part of a community, but I didn't anticipate its place in a movement - a movement guided by pioneers on the new frontiers of love and acceptance."

Pioneers of the LGBTQ movement are featured in a plaque that stands alongside the artwork installation, serving as a time-line of Miami-Dade County’s Lesbian, Gay, Bisexual, Trans and Queer history.

City of North Miami Councilman Scott Galvin passionately recognized each honoree, starting with Ruth Shack: “We start with the lightning rod, the person who helped launch the LGBTQ movement across the United States,” said Councilman Galvin. 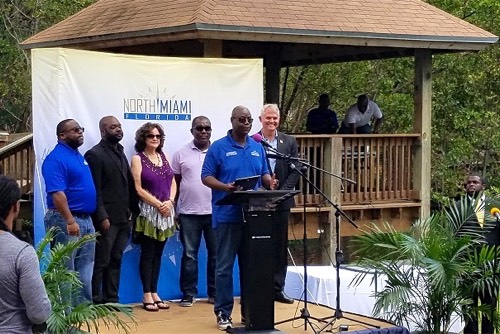 “It started here in Miami-Dade County in 1977 when Ruth Shack as a County Commissioner made the historic motion to amend the human-rights ordinance to include gay people. She made history 40 years ago not only for Miami-Dade County, but also setting into motion the force of a national movement that could not, would not – and will not — be stopped,” added Galvin.

“I am honored,” said Ruth Shack. “When we started this pursuit 40 years ago, and we tried to get the gay community together, there was no such thing. Because you risked your life, your family reputation and your job if you acknowledged the fact openly that you’re gay. And we see so many of the pioneers who had the courage to come forward here today. It’s so inspiring, so splendid. But we still have so much more work to do.” 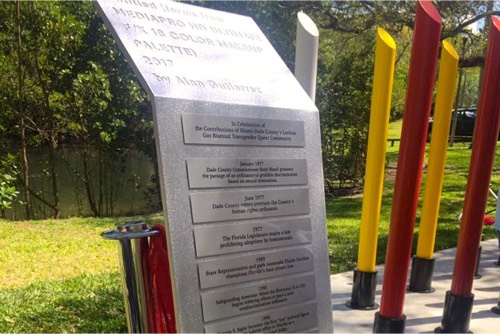 Councilman Galvin also introduced some of the other LGBTQ icons honored by the City of North Miami at the unveiling, including:

• Florida State Rep. Elaine Gordon (the park where the installation is located is named after Gordon). She was an early proponent of legislation against hate crimes, and was an early champion of human rights (her children and grandchildren accepted the award on behalf of Rep. Gordon)
• Former Miami-Dade Circuit Judge Victoria Sigler, the first openly LGBTQ political figure to win judicial office in the state of Florida
• Miami-Dade Circuit Judge David Young, who came out publicly in 1994 while serving on the county court
• Mark King Leban, the first openly gay man appointed a Dade County court judge
• Former North Miami Mayor Kevin Burns, the first openly gay mayor in Miami-Dade County
• North Miami resident Martin Gill, an openly gay man who in 2010 won the right to become an adoptive parent, effectively ending Florida’s 33-year ban on gay adoption
• Florida State Rep. David Richardson, who in 2012 became Florida’s first openly gay member in its House or Senate
• SAVE, the LGBTQ-rights group that led the drive to restore the Miami-Dade human-rights ordinance in 1998, years after the battle between Anita Bryant and LGBTQ activists. 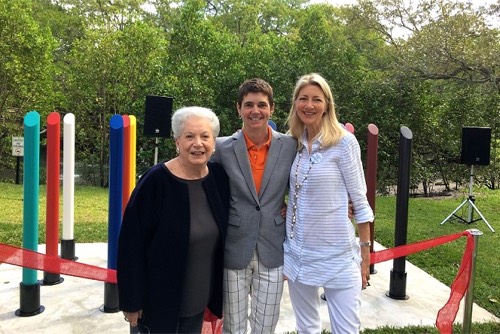 A city of North Miami Art in Public Places selection committee, approved by City Manager Larry Spring, reviewed all proposals and made the final selection for the new art installation.

The primary criteria for selection was previous artistic accomplishment, public art experience, and approach to the site-specific project.

The five-foot tall, vertical marine grade paint-coated metal sculptural forms arise from a set of exactly matched specific colors - these colors are the 18 industry-standard makeup colors used for special effects on stage and in film.

"The power of queerness lies not only in the potential to learn, but the ability to teach," said the artist Alan Gutierrez, whose work was chosen by the selection committee. "To teach how to access the tools, modalities, and states of mind needed to assimilate new progressive and fluid identities within an uncharted spectrum, while expanding the current rigid definitions of what it means to love - both ourselves and others," added Gutierrez.

"While this narrative may appear personal, it's actually quite universal. These colors are literally used in theatrical and cinematic representations of characters to convey or accentuate a hyperbolized reality of who we can be, or what can be done onto us. These representations exist within a virtual space which can, too, become our reality," said the artist Alan Gutierrez.

Elaine Gordon Enchanted Forest Park in North Miami is a 22-acre park with natural oak hammocks which are hundreds of years old. It also features a creek and peaceful walking trails. City leaders chose the site for the new art in public places installation because it will allow visitors to reflect on historic LGBTQ triumphs, while drawing inspiration from the strength of its natural surroundings.